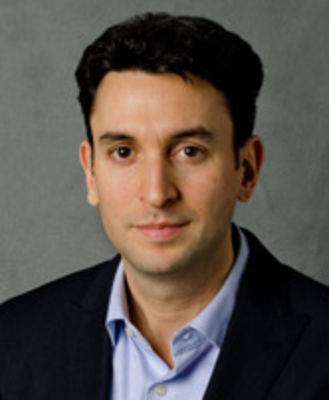 Steven Franconeri is leading scientist, teacher, and speaker on visual thinking, visual communication, and the psychology of data visualization. He is a Professor of Psychology in the Weinberg College of Arts & Sciences at Northwestern, Director of the Northwestern Cognitive Science Program, as well as a Kellogg Professor of Management & Organizations by Courtesy. He is the director of the Visual Thinking Laboratory, where a team of researchers explore how leveraging the visual system - the largest single system in your brain - can help people think, remember, and communicate more efficiently.

His undergraduate training was in computer science and cognitive science at Rutgers University, followed by a Ph.D. in Experimental Psychology from Harvard University, and postdoctoral research at the University of British Columbia. His work on both Cognitive Science and Data Visualization has been funded by the National Science Foundation, as well as the Department of Education, and the Department of Defense. He has received a prestigious National Science Foundation CAREER award, given to researchers who combine excellent research with outstanding teaching, and he has received a Psychonomic Society Early Career award for his research on visual thinking.

Yelena Kalyuzhnova
After working as an Economic Adviser to the President of Kazakhstan, Yelena founded and is Director of the Centre for Euro-Asian Studies at the University of Reading. She has a wide knowledge of the transition and emerging economies, was an economic adviser on Caspian issues to the Rt. Hon. Lord ...
Jama Summers
Expertise: Information Systems Management, Technology-Mediated Collaboration Education: 2006-Arkansas State University, B.S. Computer Information Technology 2011-University of Arkansas at Little Rock, M.S. Management Information Systems 2015-University of Oklahoma, Ph.D. Business Administra...
Casey Newmeyer
Starbucks within Barnes and Noble, Dell with Intel inside, and FedEx Kinko’s are examples of brands joining together to form a partnership. Casey Newmeyer, PhD, focuses her research on brand partnerships and alliances such as co-brands and brand acquisitions. From the perspective of a marketing m...