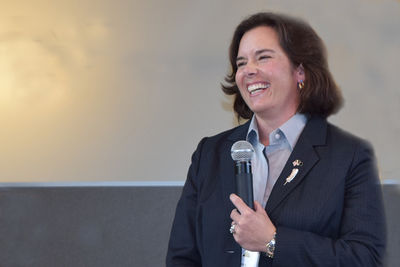 In her role at Blue Origin, a commercial launch company dedicated to opening human access to space, Tamaira Ross is leading design of several elements necessary for orbital flight. Previously, she was a technical fellow in Boeing Defense, Space & Security, where she led preliminary vehicle design and rapid development of aircraft and spacecraft including Boeing’s Phantom Phoenix small satellite program and related efforts.

Her professional interests include aircraft design, spacecraft design, multidisciplinary optimization and alternative energy. She has 10 patents, two of which have been built and tested as working prototypes. She received the 2014 Purdue University Outstanding Aerospace Engineer award; the 2011 Puget Sound Engineering Council Industry Engineer of the Year award; a 2010 Purdue Alumni 40 under 40 award; and the 2010 Society of Women Engineers Emerging Leader in Product Research, Design & Engineering award. Ross has a B.S. and M.S. in aeronautical engineering from Purdue University. She also has an M.S. in mechanical engineering and an MBA in technology management from the University of Washington.

Tamaira holds a B.S. (1996) and a M.S. (1998) in Aeronautical Engineering from Purdue University. She also attended the University of Washington where she obtained a M.S. in Mechanical Engineering (2002) and a Technology Management MBA (2008).

Erkki Ikonen
Peer-reviewed scientific articlesJournal article-refereed, Original researchPredictable quantum efficient detector based on n-type silicon photodiodesDönsberg, Timo; Manoocheri, Farshid; Sildoja, Meelis; Juntunen, Mikko; Savin, Hele; Tuovinen, Esa; Ronkainen, Hannu; Prunnila, Mika; Merimaa, Mikko...
Nathan Phillips
Water loss is closely coupled to carbon gain by plants and ecosystems. I study the physiological mechanisms and processes by which plants and ecosystems regulate water loss and carbon gain, and how such processes may be altered under global environmental change.
Phil Haumiller
Phil brings 50 years of banking and banking related experience. In those fifty years, he has been a banker, worked for a core banking software provider designing banking software, been a banking and bank technology consultant. During his career, he has worked with banks throughout the United Stat...