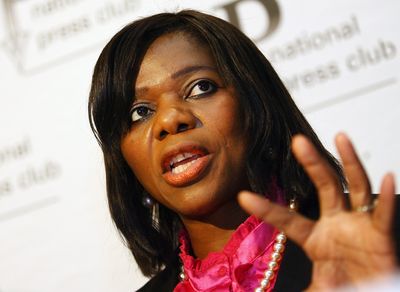 Thulisile Nomkhosi Madonsela was born in 1962 in Soweto. Her parents, Nomasonto and Bafana were both traders. She obtained a bachelor of Law from the University of Swaziland in 1987 and three years later, an LLB at Wits University. She then started working as an assistant teacher at her former school, Evelyn Baring High School, and taught from 1980 to 1983. In 1984 she entered the legal profession as a legal and education officer at the Paper Printing Wood & Allied Workers Union where she worked from 1984 to 1987.

Since 1987, Madonsela has worked in several government departments, civil society organisations, and academia. She has, for instance, lectured law at Wits University; been the presiding officer at the Independent Electoral Commission (IEC); worked as deputy director at the Justice Department and held the position of managing director at the Office of the Status of Women in the Presidency.

On 19 October 2009 Madonsela was appointed Public Protector by President Jacob Zuma for a non-renewable seven year term. She was the only full-time commissioner in the South African law Reform Commission at the time. Of all her achievements and high profile positions that she has held, it is the Public Protector position that most put her in the public eye. During her tenure she investigated several high profile cases, including the probe into state resources allocated to Zuma's Nkandla residence upgrade ("Secure in Comfort" 19 March 2014) and the State Capture report ("State of Capture" 2 November 2016). For her role as Public Prosecutor Madonsela received international praise for her efficiency and professionalism, including recognition by the Daily Maverick, Time, Glamour, ANN7, Transparency International, and the BBC. She left that office on 14 October 2016 and was replaced by Advocate Busiswe Mkhwebane.

An advocate for Gender equality and the advancement of women, Madonsela is a member of South African Women Lawyers Association (SAWLA) and Business Women’s Association of South Africa (BWASA). In 2012, she was honoured with South Africa’s most Influential Women Award. She has authored and co authored several publications including books, chapter, journals and handbooks on gender management and gender mainstreaming. Madonsela was also one of the drafters of South Africa’s current constitution in 1994.