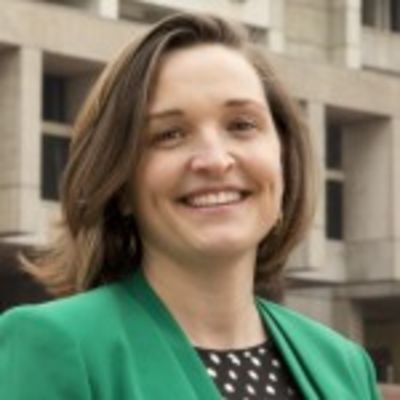 Boston University
Executive Director of the Initiative on Cities

Katharine Lusk is the founding Executive Director of the Initiative on Cities at Boston University where she spearheads new university-wide programs and research, including the Menino Survey of Mayors, student government fellowships, original urban scholarship and multi-stakeholder conferences. She also serves as Senior Personnel to the NSF-funded Smart City Cloud Platform project directed by the Hariri Institute and on the Advisory Board of the BU Urban Affairs and City Planning program.

Katharine was a policy advisor to former Boston Mayor Thomas M. Menino, where she led his work to make Boston the first city in the country to achieve pay equity for women. In addition to creating the Mayor’s Women’s Workforce Council, she authored, “Boston: Closing the Wage Gap,” identifying evidence-based interventions employers can take to close the gender wage gap. An enthusiastic civic entrepreneur, Katharine launched a new capital fund for child care providers, a platform for women small business owners, Women on Main, and the nation’s first mobile City Hall, City Hall to Go.

In 2014, she served as an advisor to Massachusetts Governor Deval Patrick’s Successful Women, Successful Families Task Force. Prior to entering public service, Katharine worked as a brand strategist and researcher for Fortune 500 companies. She was most recently the VP/Director of Branding with McCann Erickson, the global advertising agency.

She received a Masters in Public Policy from the Harvard Kennedy School of Government, where she was the recipient of the Barbara Jordan Award for Women’s Leadership and the Manuel Carballo Award for her graduate thesis modeling state-run paid family leave for Massachusetts. She earned her BA from Williams College.

Why I’m an Unabashed Fan of America’s Mayors

Next City By Katharine Lusk, Initiative on Cities “Lobbyists aside, spending quality time with elected officials is not high on anyone’s priority list these days…” View full article

Urban nation: What’s at stake for cities in the 2016 elections

Lessons From a Former Mayor in One Accessible Collection

NextCity Katharine Lusk, Initiative on Cities During two decades as mayor of Boston, Thomas Menino obviously learned a few things about the job he held… Expert quote: “He always used to tell us, that the things young people want are the same things old people want.” View full article

Why mayors are looking for ideas outside the city limits

Governing By Katharine Lusk, Initiative on Cities In  the search for effective evidenced-based government, it’s important to have somebody to connect the dots… View full article by expert Katharine Lusk

Jacob Goldenberg
Jacob Goldenberg is a professor of Marketing at the School of Business Administration in the Hebrew University of Jerusalem, and a visiting professor in the Columbia business school and in IDC. He received his Ph.D. from the Hebrew University of Jerusalem in a joint program of the School of Busin...
Yuan Liao
Areas of Interest Cross-cultural Management Regulatory Focus Cultural Intelligence Multiculturalism Psychological Contract Echo Yuan Liao is Assistant Professor in the Department of Managing People in Organizations at IESE. She holds a PhD in International Business from Beedie School of Busines...
Umut Ekmekci
Specialized in creative thinking and innovation management. In addition to his academic position,he serves as mentor, consultant and trainer to firms from various different business sectors. His works focuses upon three pillars of innovation; (1) Designing corporate innovation systems and their c...