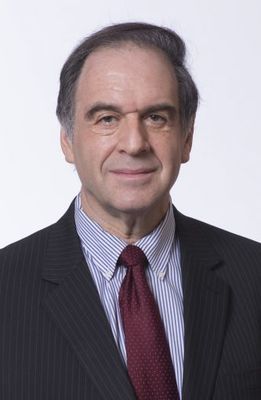 Jeffrey Sonnenfeld: When Should CEOs Take a Political Stand?

Jeffrey Sonnenfeld served as full tenured professor at Emory's Goizueta Business School for a decade and a professor at the Harvard Business School for a decade, and is currently the senior associate dean of leadership programs as well as the Lester Crown Professor in the Practice of Management for the Yale School of Management, as well as founder and president of the Chief Executive Leadership Institute, a nonprofit educational and research institute focused on CEO leadership and corporate governance.

Professor Sonnenfeld's related research has been published in 100 scholarly articles which appeared in the leading academic journals in management such as Administrative Sciences Quarterly, the Academy of Management Journal, the Academy of Management Review, the Journal of Organizational Behavior, Social Forces, Human Relations, and Human Resource Management. He has also authored eight books, including The Hero's Farewell, an award-winning study of CEO succession, and another best seller, Firing Back, a study on leadership resilience in the face of adversity.

Professor Sonnenfeld earned the 2018 Ellis Island award from the US Ellis Island Foundation. He was Harvard’s first John Whitehead Faculty Fellow and won outstanding educator awards at Yale, Emory and the American Society for Training and Development. His work is regularly cited by the general media in such outlets as: BusinessWeek, Fortune, Forbes, the Wall Street Journal, the New York Times, Newsweek, Time, the Economist, the Financial Times, the Washington Post, CBS (60 Minutes), NBC (The Today Show), ABC (Nightline, Good Morning America), CNN, and Fox News, as well as PBS, where he is a regular commentator for FORTUNE and CNBC. BusinessWeek listed Sonnenfeld as one of the world’s 10 most influential business school professors and Directorship magazine has listed him among the 100 most influential figures in corporate governance. He is the first academician to have rung the opening bells of both the New York Stock Exchange and the Nasdaq Stock Exchange.

Ardeshir Bayat
Overview Principal Investigator and Reader (Tenured Associate Professor) based at the University of Manchester Biography My initial exposure to research was a project on the process of wound healing as a first year medical student at UCL in London. This small study encouraged me to do a one year ...
Devon Proudfoot
Overview Devon Proudfoot is an Assistant Professor of Human Resource Studies in the ILR School at Cornell University. Dr. Proudfoot''s research examines stereotyping and inequality, creativity judgments, and motivational underpinnings of organizational attitudes and behavior. She is particularly ...
Shashi Kiran
Lecturer Shashi Kiran is a thinker, learner, and big believer in data. He is a seasoned analytics professional with more than a decade of experience working in several Silicon Valley based companies such as Cisco, Symantec, Veritas and SanDisk (now Western Digital) and has held various key roles ...