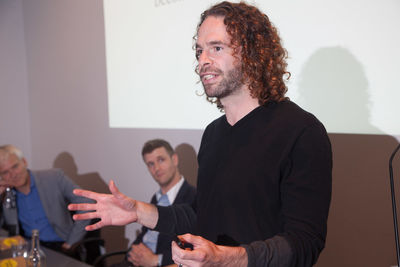 James Evans is a Professor in Geography whose research explores how cities learn to become smarter and more sustainable. He has published widely on urban environmental governance, with over 30 peer-reviewed papers and two authored books in the field and has held fellowships at UCLA and the Volkwagen Institute. His current research explores the role living labs are playing in achieving smart and sustainable urban development, and he is leading the University''s involvement in Triangulum, a five-year Horizon 2020 project to establish smart districts across Europe. He is committed to developing innovative and interdisciplinary action research styles, establishing and directing the University Living Lab and the Manchester Cycling Lab, and has worked with a range of external organisations, including the United Nations, Arup and a range of national and local governments. Since 2014 he has been a Formas Guest Researcher at Lund University leading research on urban labs.

Director of Undergraduate Studies for Geography (2011- 2014)

Fellow of the Volkwagen Foundation

Fellow of the Institute for British Geographers

Fellow of the Association of American Geographers

Referee for book proposals from a range of publishers including Routledge, Taylor and Francis, Sage, Earthscan, Ashgate and Elgar

Member of the United Nations Economic Commission for Europe Team of Specialists on Public-Private Partnerships.

Olivier Toubia
Olivier Toubia is the Glaubinger Professor of Business at Columbia Business School. His research focuses on various aspects of innovation (including idea generation, preference measurement, and the diffusion of innovation), social networks and behavioral economics. He teaches a course on Customer...
Caterina Moschieri
Caterina Moschieri’s teaching and research focus on Corporate and Competitive Strategy. Her research and intellectual interests span from mergers and acquisitions to spin-offs to organizational design. One of Caterina’s main preoccupations is that research and teaching are strongly connected and...
Benedict Rogers
Biography Ben read Engineering Science with first class honours at the University of Oxford and then stayed on for a D.Phil. under the supervision of Professors Alistair Borthwick and Paul Taylor. In 2002, he moved to the US to work with Professor Robert A. Dalrymple at the Johns Hopkins Univers...