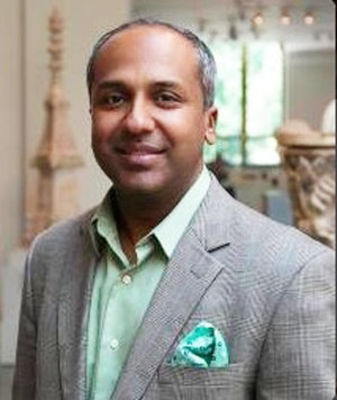 Sreenath "Sree" Sreenivasan (born October 28, 1970) is an academic and practitioner in journalism and communications, serving as the inaugural Marshall R. Loeb visiting professor at Stony Brook University School of Journalism in New York. He was previously chief digital officer at the Metropolitan Museum of Art and chief digital officer of Columbia University. He also served as chief digital officer of the City of New York from October 2016 through May 2017. He has been a technology journalist based in New York City and served as an academic administrator and professor in the Columbia University Graduate School of Journalism. In 2015, he was named one of Fast Company magazine's Most Creative People of the year. He was also identified as the most influential Chief Digital Officer of 2016 by CDO Club.

Sreenivasan was born in Tokyo, Japan, and grew up in USSR, United States, Fiji, and India. Sreenivasan's father was a diplomat for the Indian government, which meant his family often relocated.He attended kindergarten in Moscow; P.S. 6, a public elementary school, in Manhattan; Marist Brothers High School in Suva, Fiji; and St. Stephen's College in Delhi, India. He received a Master of Science degree in journalism from the Columbia University Graduate School of Journalism in 1993.

Sreenivasan was on the faculty of the Columbia University Graduate School of Journalism since 1993 as a professor of professional practice. His courses at Columbia have focused on new media, web design, and social media in the practice of journalism, as well as media entrepreneurship. Still currently an adjunct professor there, he regularly runs workshops for professional journalists on the advanced use of the Internet and multimedia reporting.

In 2005, Sreenivasan was appointed Dean of Students at the Journalism School, overseeing student-oriented programs. He is the former advisor to the school's chapter of the Society of Professional Journalists and won the David Eshelman Award for Outstanding Campus Advisor in 1998.[9] In 2008, he was named Dean of Student Affairs, supervising admissions, student services and career services at the school. On July 11, 2012, Columbia University named Sreenivasan its first Chief Digital Officer.

Sree Sreenivasan giving address at 2016 Columbia Journalism Alumni Awards Sreenivasan was appointed the Metropolitan Museum of Art's Chief Digital Officer in August 2013. In this role he supervised 70 employees throughout the museum.

Sreenivasan helped found SAJA, the South Asian Journalists Association, a group of more than 1,000[13] journalists of South Asian origin in the U.S. and Canada. He was the association's first president and continues to sit on its board, while also serving as an editor and writer of SAJAforum, one of the most widely read South Asian news and analysis blogs. He was also named by "UNITY: Journalists of Color" in a seed list of one of the 100 top journalists of the century.

For six years, he was WABC-TV's "Tech Guru," before moving to WNBC-TV in January 2007 to become its technology reporter. He appeared twice a week on air and on WNBC.com until January 2009. From 2009 through 2011, Sreenivasan helped launch and develop DNAinfo.com, a hyper-local Manhattan-centric news startup, launched by Ameritrade founder and Chicago Cubs owner Joe Ricketts.

He has contributed more than 50 articles to The New York Times on business and technology, and has hosted more than 40 episodes of his own podcast, the @SREE SHOW, for CBS Radio.

In May 2016, Sreenivasan made news headlines by spearheading an effort to boycott participation in all-male panels, conferences, and events. He would later update this to also pledging not to attend any all-male panels.

In 2016, after three years at the top digital post at the Metropolitan Museum of Art, he announced he was leaving amidst the museum's financial troubles. Although Met president Daniel Weiss called Sreenivasan "a superstar," the museum faced a looming deficit, hovering between $9 million and $10 million. This financial predicament led the Met to part ways with Sreenivasan and other high-profile executives, such as Cynthia Round, its senior vice president for marketing and external relations, and Susan Sellers, head of design. At the Met, Sreenivasan led the redesign of their website and the development of a smartphone app.