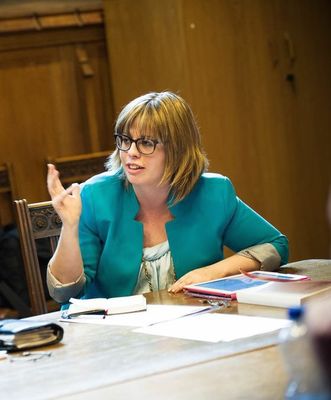 J. Michelle Coghlan joined Manchester as a Lecturer in American Literature in September 2013, having previously taught as a post-doctoral lecturer at Princeton. She specializes in nineteenth and twentieth century American literature and culture with a particular emphasis on radical print culture and memory, the literary life of the senses, and food studies. Her first book, Sensational Internationalism, was awarded the 2017 Arthur Miller Centre First Book prize in American Studies. Her new project, Culinary Designs, aims to chronicle the rise of food writing and the making of American taste in the long nineteenth century. Her articles and reviews have appeared or are forthcoming in Resilience: A Journal of the Environmental Humanities, Arizona Quarterly, the Henry James Review, Poe Studies, American Nineteenth Century History, and the Journal of American Studies. In 2014, she guest edited "Tasting Modernism," the Winter 2014 special issue of Resilience and is currently editing The Cambridge Companion to Food and Literature.

Dr. Coghlan has acted as a grant assessor for the US-UK Fulbright Association, and serves on the Academic Advisory Board affiliated with the Musée Franco-Américain du Château de Blérancourt and the Sussex Centre for American Studies. From 2014-2017, she served on the Steering Committee of the British Association of Nineteenth-Century Americanists, a UK-based organisation of researchers, teachers, writers, and cultural critics engaged in progressive, interdisciplinary scholarship concerning American writing in the long nineteenth century which sponsors lectures, reading groups, a biennial conference in the UK with invited speakers from the US and round the world. (http://www.branca.org.uk).

She teaches a number of modules at Manchester, including American Literature to 1900, an Introduction to American Studies seminar centered on Americans in Paris, and Occupy Everything, a third-year seminar on revolution and radical memory in U.S. culture from OWS to the Haitian revolution.

Toby Hur
Experienced Educator with a demonstrated history of working in the higher education industry. Skilled in Nonprofit Organizations, Social Services, Policy Advocacy, Community Organizing, Association Marketing, Resource Development and Nonprofit Management. Strong interest in innovations in human s...
Anjali Bal
Sasserath Marc
Biography Marc Sasserath is Professor for Innovation and Entrepreneurship with a focus on entrepreneurial branding and cultural transformation and is lecturing in Paris and in Berlin. Prof. Sasserath is Founder &amp; CEO of Sasserath Munzinger Plus Berlin/Milano, a brand consultancy that works wi...