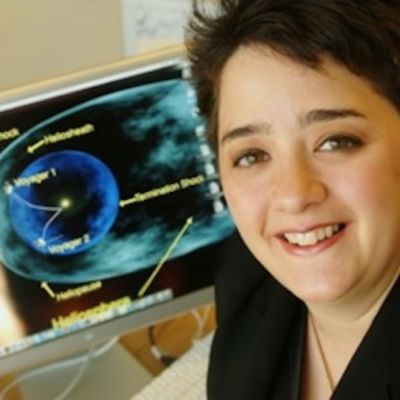 Merav Opher’s interests are in how plasma and magnetic effects reveal themselves in astrophysical and space physics environments. In particular, in how stars interact with the surrounding media, how the solar system interacts with the local interstellar medium, and the interaction of extra-solar planets with their host stars. Her other interests are in how magnetic disturbances are driven and propagate from the Sun to Earth. She uses state-of the art 3D computational models to investigate these phenomena. Dr. Opher was awarded the prestigious NSF CAREER award and the Presidential Early Career Award for Scientists and Engineers (PECASE) for studies of shocks in interplanetary space. She also received the Mason Emerging Researcher/Scholar/Creator Award. She is actively involved in several leadership roles in the Space Physics and Astronomy community.  She obtained her PhD in University in Sao Paulo in 1998. Dr. Opher had her postdoctoral training at the Plasma Group of the Physics Dept of UCLA from 1999-2001 and was a Caltech Scholar at the Jet Propulsion Laboratory and at University of Michigan from 2001-2004. Before coming to Boston University, from 2005-2010 she was an associate professor at George Mason University.

The Loyal Engineers Steering NASA’s Voyager Probes Across the Universe

New York Times quoting Merav Opher, College and Graduate School of Arts and Sciences “In the early spring of 1977, Larry Zottarelli, a 40-year-old computer engineer at NASA’s Jet Propulsion Laboratory in Pasadena, set out for Cape Canaveral, Fla., in his Toyota Corolla…” Expert quote: ‘‘I hear a lot of people saying, ‘So what?’ I […]

Tech Times Merav Opher, College of Arts & Sciences A new study funded by the National Aeronautics and Space Administration (NASA) has revealed that the heliosphere of the sun is dominated by two giant jets of material that blasts over the star’s south and north pole… View full article referencing expert Merav Opher

The Space Reporter Merav Opher, College of Arts & Sciences According to a NASA statement, a new NASA-funded study led by Merav Opher of Boston University has found that the bubble formed by the Sun’s magnetic field, the heliosphere, is defined by, not one, but rather two jets of solar wind… View full article featuring expert […]

NASA Merav Opher, College of Arts & Sciences As the sun skims through the galaxy, it emits charged particles in a stream of plasma called the solar wind. The solar wind, in turn, creates a bubble known called the heliosphere that extends far beyond the planets of the solar system… Expert quote: “Everyone’s assumption has […]

RedOrbit Merav Opher, College of Arts & Sciences As our Sun moves through the Milky Way, it leaves a trail of particles known as the solar wind in its wake. The solar wind then forms a protective shell called the heliosphere, which guards us from galactic cosmic rays… Expert quote: “Most researchers don’t believe in […]

Why Did It Take NASA A Year To Realize The Voyager Left The Solar System?

WGBH News Merav Opher, College of Arts & Sciences For the first time in history, we’ve left the solar system… Expert quote: “It really is a milestone. It’s the first man-made object to cross the last boundary that separates our home. Voyager is like our spy that we sent to tell us what lies beyond our home.” […]

Boston Globe (subscription required) Merav Opher, College of Arts & Sciences For months, researchers have been arguing about just where in the universe the Voyager 1 spacecraft is… View full article

USA Today Merav Opher, College of Arts & Sciences We’ve made it to the stars, at last… Expert quote: “The historic crossing is extremely dramatic and very romantic, but also bittersweet. … I wish Voyager 1 could’ve stayed longer at the brink of interstellar space. Such a pity it left. I wanted more data.” View […]

Magnetic bubbles may mean Voyager 1 has left the Solar System

Nature Merav Opher, College of Arts & Sciences Leaving the Solar System is like leaving any familiar territory without maps — you have no idea what’s coming next, or even what you’ve just journeyed through… Expert quote: “People are having a really hard time swallowing this scenario.” View full article

Voyager 1 has left our solar system and entered interstellar space…or HAS it? Nasa dismisses ‘controversial’ claim

Daily Mail Merav Opher, College of Arts & Sciences Voyager 1 appears to have at long last left our solar system and entered interstellar space… Or has it?… View full article

Richard Gowan
Richard Gowan is the Research Director at the New York University Center on International Cooperation. He is also a Senior Policy Fellow at the European Council on Foreign Relations. He is the overall editor of the Annual Review of Global Peace Operations, the leading source of data and analysis ...
Akio Mori
Biography: Akio Mori has extensive experience in the financial field, both in New York and Tokyo. Starting his career as a commercial banker at Bank of Tokyo Mitsubishi UFJ, Mr. Mori was responsible for small to mid-sized companies in center of Tokyo. He then moved to the New York branch to engag...