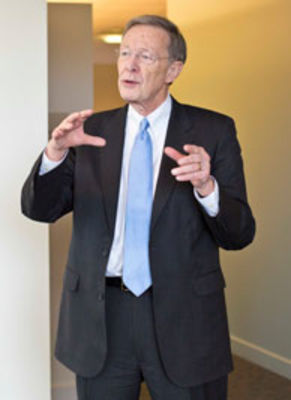 Harry L. Davis studies leadership, strategy, creativity and innovation. His scholarly research has appeared in a number of top-tier academic journals, including the Journal of Consumer Research and the Journal of Marketing. Among his publications are "The Promising Start-up Within: A Guide to Internal Corporate Venturing," written with Russ Rosenzweig and published in The Virtual Strategist in October 2001, and "Purchasing Behavior in Embedded Markets," written with fellow Chicago Booth faculty member Jonathan Frenzen and published in the June 1990 issue of the Journal of Consumer Research.

Davis, who joined the faculty in 1963, has introduced many innovative executive education programs in the United States and abroad. These programs include the first core leadership program of any top-rated MBA program in the country and the Management Lab. Davis also helped Chicago Booth pioneer its first international campus in 1983 where he served as deputy dean for MBA programs until 1993. He was also professor of behavioral science for the European Institute for Advanced Studies in Management in Brussels.

Davis is a trustee and member of the executive committee of the National Opinion Research Center at the University of Chicago, a national organization devoted to large-scale social research in public interest. He served on the boards of Golden Rule Insurance and Harnischfeger Industries and was chairman of the board of the Graham School of General Studies. Davis has consulted for many organizations, including ABB, the Boston Consulting Group, Monsanto, and the Terra Museum of American Art.

Outside of academia, Davis enjoys classical guitar and passenger trains.

With Russ Rosenzweig, "The Promising Start-up Within: A Guide to Internal Corporate Venturing," The Virtual Strategist (October 2001).

Laurie Krigman
Academic Division: FinanceLaurie Krigman is an Associate Professor of Finance at Babson College. Dr. Krigman specializes in the study of initial public offerings, investment banking and corporate finance. She has presented her work at numerous professional conferences and has published in leading...
Peter Jennergren
Ph. D. 1971 (Stanford). Professor of management (1946 Donation Chair) 1987-2011. Emeritus since July 2011.    Research interests Peter Jennergren’s research interests include valuation models where accounting data are used. Downloadable papers A Tutorial on the Discounted Cash Flow Model for...
Arnaud Raffin
Areas of expertise Risk management Biography Arnaud Raffin is a corporate and market Finance professor at GEM since 2009. From 2008 to 2016, he has also held a treasury and credit management advisory role. Starting with SMEs in 2008, he would continue his career as an exclusive Big 4 contracto...