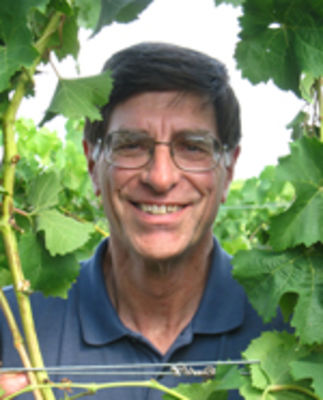 Dr. Alan N. Lakso brings more than 45 years' experience in grape research and teaching to CUVEE. He earned a PhD in plant physiology in the Viticulture and Enology Department at the University of California, Davis, where he completed research on temperature effects on malic acid in wine grapes. Then, in 1973, he joined the Cornell University faculty at the New York State Agricultural Experiment Station in Geneva, New York. He retired (in title only) in 2014, but is still active as professor emeritus in lecturing, continuing research, and working with the wine industry.

Lakso's research emphasizes integrating vine development with environmental and cultural influences as they affect vine performance and grape/wine quality. He has collaborated with flavor chemists on the ways in which climate and terroir affect grape and wine characteristics. Climate change and developing new technologies for the vineyard are areas of continuing interest.

Lakso works closely with the grape and wine industries in New York and has been awarded the New York Wine and Grape Foundation Research Award for outstanding contributions to the industry. He presented the American Society for Enology and Viticulture Honorary Research Lecture at the national meeting in 2017. He has taught CUVEE multiple times as well as several Cornell courses on vine biology and vineyard management.

Hear Lakso talk about the effects of climate change on the wine industry on radio station WXXI's Connections program on April 14, 2017.

Paviter (Pavi) Binning
Mr. Binning has an extensive range of public company experience from industries including food, alcoholic beverages, telecommunications, retail and building materials. Prior to joining Weston, Mr. Binning was at Nortel Networks Corporation where he initially held the role of Chief Financial Offic...
Kevin Mohan
Kevin P. Mohan joined the Negotiation unit at Harvard Business School in 2012. He also serves as a Senior Advisor at Summit Partners, a $15 billion venture capital and private equity firm, and as an independent director for several companies and nonprofit entities. Kevin teaches Negotiations and ...
Sven Laumer
Sven Laumer (born 1982) studied information systems at the University of Bamberg, Germany and the Institute of Technology, Tallaght, Dublin, Ireland from 2002-2007. After completing his studies he worked both as a research associate and as a senior research fellow at the Department of Information...