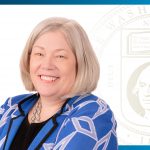 This January, the George Washington University Board of Trustees announced the appointment of Ellen Granberg, Ph.D. as the 19th president of the university. Granberg, a sociology scholar, is currently the provost and senior vice president for academic affairs at Rochester Institute of Technology and was previously an academic leader at Clemson University.

Ellen will become the first woman to serve as GW’s president when she takes the helm of the largest university in the nation’s capital on July 1. Granberg, for her part, stated that it was a “great honor” to be named president, and that what drew her to GW was the incredible community of students, faculty, staff, alumni and friends.

Ellen Granberg has a long list of accomplishments throughout her career. Among the most significant, she has led efforts that improved graduation and retention of all students and significantly reduced achievement gaps between Black, Indigenous and People of Color (BIPOC) and non-BIPOC students. Additionally, she established an academic division focused on serving adult learners and supporting regional and national economic development needs.