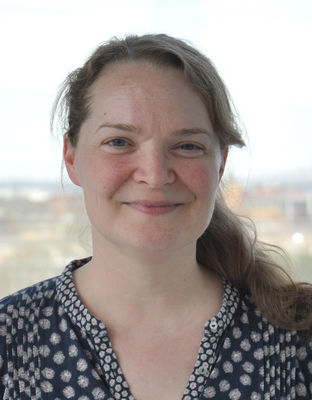 Emma is a Consultant Gynaecological Cancer Surgeon whose research interests include screening, prevention and the early detection of gynaecological cancers, as well as developing new treatments and interventions for women with established disease.

Emma Crosbie (nee Davidson) studied medicine as an undergraduate at Edinburgh University Medical School. She was awarded an intercalated  First Class Honours BSc in Psychology  and the Drever Prize for Psychology in 1995, having scored highest amongst her year group. In 1997, she was awarded her MBChB with Honours , the James Scott Scholarship for Obstetrics , Distinctions in Obstetrics, Paediatrics and Surgery , and the Dorothy Gilfillan Prize,  awarded to the woman student most distinguished in the final MBChB exams.

Following her pre-registration house jobs, Emma began her career in Obstetrics and Gynaecology as a Senior House Officer at Edinburgh Royal Infirmary. In 1999, she moved to Manchester to work at the Paterson Institute for Cancer Research and St Mary's Hospital as the Joseph Starkey Clinical Research Fellow under the supervision of Professors Peter Stern and Henry Kitchener. In 2002, she was awarded a PhD in Gynaecological Oncology by the University of Manchester for her thesis entitled 'Immunological aspects of HPV infection in vulval intraepithelial neoplasia'. For this work, she was awarded the Edgar Gentilli Prize for original research into gynaecological cancer by the Royal College of Obstetricians and Gynaecologists.

Emma returned to full time clinical training as a Senior Senior House Officer and then Specialist Registrar in Obstetrics and Gynaecology in the North West in 2002. In 2006, she successfully gained Membership of the Royal College of Obstetricians and Gynaecologists. In 2008, she became a Walport Clinical Lecturer in Gynaecological Oncology, combining subspecialty training in Gynaecological Oncology with research. During this time, she was awarded the RCOG Harold Malkin prize and the Manchester Business School Medical Leadership in Practice prize.

In 2013, Emma was awarded an NIHR Clinician Scientist Fellowship and became a Senior Lecturer and Honorary Consultant in Gynaecological Oncology at the University of Manchester.

Kaye Williams
Overview Outside of running a successful research group and teaching highly motivated students on the MPharm programme, many of my academic leadership and management roles within the University of Manchester are focused upon the promotion and development of research. Specific contributions are ma...
Teemu Leinonen
I practice design research in the field of New Media, especially related to applications, solutions and services of e-learning, collaborative learning, collaborative group work and creative work. I do research in and lead the Learning Environments research group (LeGroup) of the Media Lab Helsink...
Irini Moustaki
Experience Keywords categorical data; item response theory; latent variable models; outliers, goodness-of-fit testing, composite estimation methods.; structural equation models, missing values Research Summary My work is on the development of methodology and applications in the areas of educat...