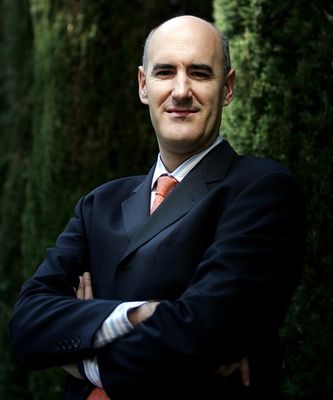 Mauro F. Guillén is the Director of the Joseph H. Lauder Institute at Penn, a researchandteaching program on management and international relations. He holds the Dr. Felix Zandman Endowed Professorship in International Management at the Wharton School and a secondary appointment as Professor of Sociology in the Department of Sociology of the University of Pennsylvania.  He previously taught at the MIT Sloan School of Management.  He received a PhD in sociology from Yale University and a Doctorate in political economy from the University of Oviedo in his native Spain. He holds dual U.S./Spain citizenship.

He is a member of the advisory board of the Escuela de Finanzas Aplicadas (Grupo Analistas), and serves on the World Economic Forum’s Global Agenda Council on Emerging Multinationals.

He has received a Wharton MBA Core Teaching Award, a Wharton Graduate Association Teaching Award, a Wharton Teaching Commitment and Curricular Innovation Award, the Gulf Publishing Company Best Paper Award of the Academy of Management, the W. Richard Scott Best Paper Award of the American Sociological Association, the Gustavus Myers Center Award for Outstanding Book on Human Rights, and the President’s Book Award of the Social Science History Association.  He is an Elected Fellow of the Macro Organizational Behavior Society, a former Guggenheim and Fulbright Fellow and a Member in the Institute for Advanced Study in Princeton. In 2005 he won the IV Fundación Banco Herrero Prize, awarded annually to the best Spanish social scientist under the age of 40.

His current research deals with the internationalization of the firm, and with the impact of globalization on patterns of organization and on the diffusion of innovations.  His most recent books are Global Turning Points (2012) and Emerging Markets Rule (2012). He is also the author or coauthor of The New Multinationals (2010), Green Products (2011), Building a Global Bank: The Transformation of Banco Santander (2008), The Rise of Spanish Multinationals (2005), The Taylorized Beauty of the Mechanical (2006), The Limits of Convergence: Globalization and Organizational Change in Argentina, South Korea, and Spain (2001), Models of Management (1994), and The AIDS Disaster (1990).

His research has appeared in a variety of academic journals in four separate fields:

His media appearances include:

He was a member of the University of Oviedo team that won the Spain National Basketball University Championship in 1987.

Nan Zhou and Mauro Guillen (2015), From Home Country to Home Base: A Dynamic Approach to the Liability of Foreignness , Strategic Management Journal, 36, pp. 907917.

Mauro Guillen, The Architecture of Collapse: The Global System in the 21st Century (2015)

Abstract: We ask why people play the lottery in syndicates. Sharing lottery tickets with coworkers, friends or relatives may create agency problems related to opportunism in addition to the fact that playing the lottery in general is tantamount to buying an asset with negative expected value. Although it might be argued that people share lottery tickets in order to maximize their chances of winning a prize, it is also plausible that they engage in this practice to enact, cement or reproduce social ties and interpersonal trust. Using survey data on representative samples of the adult population in Spain and the United States, we adjudicate between these two hypotheses, and show that people play the lottery in syndicates primarily for social reasons.

Abstract: We combine the streams of literature on outsourcing and offshoring to investigate (1) whether choosing an R&D offshore outsourcing strategy by technological firms is advisable, and (2) where these firms are more likely to allocate these R&D services outsourcing agreements offshore, namely, in developed or developing economies. Using original survey data from European and U.S. firms in technologyintensive industries, we place especial emphasis on the fact that certain firmspecific capabilities, such as technological and international expertise, are required in order to outsource R&D overseas, especially when offshoring to developing economies, as transaction costs are still the main deterrent to outsource offshore to these regions. In addition, our results also show that in the specific case of R&D services outsourcing, knowledgeseeking objectives lead to outsource to developed economies.

Multinational management is the study of the international corporation and the global political and economic environment. This course provides an introduction to the more advanced offerings. It covers the historical origins of the multinational corporation, the economics of trade, money and investment in the world economy, and the policies and behavior of governments and international organizations. We place considerable emphasis in understanding the national and historic origins of the international firm, as well as on current issues regarding emerging economies and shifts in the political economy of global markets.

This course focuses on the comparative institutional environments in which business, government, and society interact. It provides students with a set of conceptual tools and analytical frameworks to navigate the complexities and ambiguities of the global economy. It provides an understanding of how to identify, measure and interpret the economic, social, political and cultural factors that shape regulatory policy, business strategy and market outcomes. It does so by traversing a rich empirical terrain that cuts across developing and industrialized countries, and is especially attentive to change over time. The course is deeply interdisciplinary and brings insights from economics, political science, sociology, anthropology, geography and history.

Emerging enterprises, the focus in this course, are small, new, fastgrowing organizations. Their founders and managers face multifaceted challenges: how to assess the competitive position of their business model and develop a strategy; how to develop the internal organizational structure, culture, and policies for selecting and managing employees; and how to pursue global opportunities. We cover these challenges in separate modules on strategy, human and social capital, and global issues. The human and social capital module covers classic management challenges of aligning interests of the individual and the organization; managing individual psychological needs and social influences; and developing employee capabilities that provide competitive advantage. Also covered are unique challenges that yound organizations face, i.e. building an effective culture; recruiting, selecting, and retaining talent; building systematic approaches to motivating employees; coping with the stresses of rapid growth; and leveraging the benefits (and avoiding the liabilities) of the founder's powerful imprint. ,The strategy module covers fundamental issues central to the competitiveness of the enterprise. Because the strategy field is broad, MGMT 612 emphasizes topics and frameworks that are most relevant for younger firms, such as innovation, disruption, managing resource constraints, and building capabilities. However, a key insight of the module is the importance of seeing the playing field from the perspective of the competition. Thus, by the end of this section, students will have a robust grounding in strategy that will allow them to succeed, whether their career path leads to a Fortune 100 firm or a garage start up. ,The global module covers the emerging firm's decision about when (and whether) to internationalize. This decision must address which foreign markets to enter; the mode of entry; the sequence of moves to develop capabilities; what organizational form to choose; where to establish HQ; and how to adapt to the unique economic and institutional features of different markets. In all these issues, the emphasis is on how young, resourceconstrained firms can position themselves profitably in globally competitive markets. For the final project, student teams provide integrated analysis across the modules for an emerging enterprise of their choice.

This course, is required of all firstyear doctoral students in Management and open to other Penn students with permission, provides an introduction to the psychological and sociological roots of management theory and research. The courseis predicated on the belief that to be effective as a contemporary management scholar one needs a background in "the classics." Therefore, we will be reading classics from the fields of psychology and sociology in their original form during this semester.

This is an introductory doctoral seminar on research methods in management. We examine basic issues involved in conducting empirical research for publication in scholarly management journals. We start by discussing the framing of research questions, theory development, the initial choices involved in research design, and basic concerns in empirical testing. We then consider these issues in the context of different modes of empirical research (including experimental, survey, qualitative, archival, and simulation). We discuss readings that address the underlying fundamentals of these modes as well studies that illustrate how management scholars have used them in their work, separately and in combination.