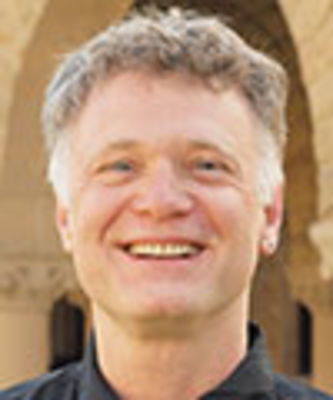 Barry received his B.S. from CSU, Chico in Biochemistry. He then went on to graduate school at the University of Oregon where he earned his Ph.D. in biochemistry with Dr. Diane Hawley. During his six years, Barry worked on many aspects of basal RNA polymerase II transcription but Barry’s main contribution to the field was showing that the TATA-binding protein (TBP) recognized its AT-rich sequence entirely through the minor groove. This was deemed impossible at the time. Barry then went on to do a postdoc with Dr. Keith Yamamoto at UCSF where he worked on glucocorticoid receptor mutants. After that Barry entered the world of biotechnology where he was employed at three different companies designing small molecules that could specifically alter gene expression. He then stepped off the standard science track and took a job with Stanford University’s Department of Genetics running an outreach program called Stanford at The Tech. Over the next ten or so years Barry helped design and update a museum exhibition (Genetics: Technology With a Twist), a website (Understanding Genetics), have given over 100 graduate students and postdoctoral fellows the opportunity to improve their communication skills, and have written hundreds of blogs both for the Understanding Genetics website and for KQED QUEST, a local PBS television show.